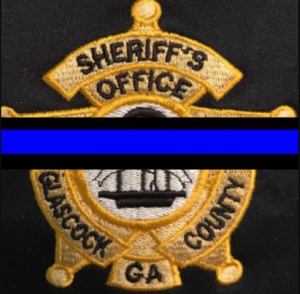 Taylor Funeral Home Gibson announces the death and funeral services of Mr. Amos Dean Couch, age 72 who was called home to be with the Lord on Monday morning July 12, 2021.

Dean was born on August 10th, 1948, and spent his early years growing up in Tignal, Georgia. He had many fond memories of growing up there surrounded by a large extended family. He often took his family there to visit places he and his siblings frequented and to reminisce about his time growing up.

Dean lived in a variety of places and worked in different professions before settling in Glascock County 42 years ago. He married a local girl and they had two children. While working different jobs, there was no doubt that law enforcement was his chosen profession. He worked a few years as a policeman in Gibson before being hired by the Louisville Police Department. He enjoyed the work especially the friends he made there. His greatest desire: however, was to be Sheriff of Glascock County. In 2005 he realized his dream. He served as Sheriff of Glascock County for 12 years before retiring because of health issues.

Dean grew up attending Tabor Baptist Church in Tignall, GA. He later attended Gibson First Baptist Church for a number of years before joining Fellowship Baptist Church. He was a member of the local Loins Club and a Gideons International. He loved to hunt and fish and enjoyed doing both when time allowed. He also spent many hours in his shop working on vehicles or just “piddling” as his wife called it.

Dean was preceded in death by his parents, Amos Parker Couch, and Willie Doris Burkhart, and his son, Jerry Dean Couch and is survived by his wife of 42 years, Gwyn Phillips Couch. His daughter, Wendy Denise Hobbs of Gibson, and his son Philip Eric (Kimberly) Couch of Glenville, and one granddaughter, Kelley Grace Hobbs, who captured his heart with her first look. He also leaves behind a special 4-legged friend, Max, who was his work buddy around the house. Dean has one brother, Jack Weston (Patricia) Moody of Colville, Washington, sisters, Nora Ann (Roger) Nicholson of West Union, WV, and Mary Jean Williams of Dearing. He also has nieces, nephews, and cousins who held a special place in his heart. Nothing made him happier than spending time with his family.

You may sign the family’s personal guestbook at www.taylorfhgibson.com

Taylor Funeral Home and Cremation Care of Gibson is in charge of arrangements.

To send flowers to the family or plant a tree in memory of Dean Couch, please visit our floral store.